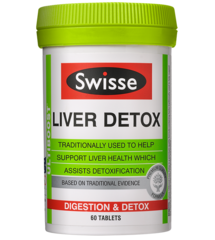 Detoxification: The liver is responsible for eliminating toxins by playing a central role in the metabolism of substances such as alcohol, helping with their removal from the body. Swisse Ultiboost Liver Detox contains St. Mary’s thistle, traditionally used in Western Herbal Medicine as a liver tonic to help support liver health and function. A healthy liver supports the detoxification process.

Indigestion: Contains turmeric and globe artichoke, which have been traditionally used in Western Herbal Medicine to help relieve indigestion.

Bloating and Cramping: Globe artichoke has traditionally been used to help relieve digestive symptoms such as flatulence, abdominal bloating and cramping.

Swisse Ultiboost Liver Detox has been formulated based on scientific and traditional evidence to take as part of a healthy detox or following rich food or drinks.

Two tablets daily, during or immediately after a meal, or as directed by a healthcare professional.

Store below 30oC. Do not use if cap seal is broken.

Do not use if pregnant or likely to become pregnant. If symptoms persist, consult your healthcare practitioner.