Manuka Health has introduced a new brand - MGO™ Manuka Honey and measures methylglyoxal content based on standards developed by University of Dresden. For example, MGO™100 Manuka Honey is certified to contain at least 100mg/kg of dietary methylglyoxal, the minimum required for health benefits. 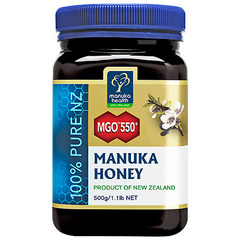 Unique to New Zealand MGO™ Manuka honey is the only 100% natural food in the world shown to have EFFECTIVE and RELIABLE anti-bacterial activity due to the active compound - Dietary Methylglyoxal which forms naturally in the nectar of manuka plant.

Unique MGO™ Manuka Honey is collected from a New Zealand plant called Leptospermum scoparium. For quite some time the unique manuka honey anti-bacterial activity was known and measured by a general measurement of its biological effect.

So far MGO™ Manuka honey has been the only food in the world found with such a significant Dietary Methylglyoxal content ranging from 20mg/kg to over 800mg/kg. In contrast all other honeys worldwide tested have ranged between 1 to 10 mg/kg, other foods range from 0 to 50mg/kg with coffee and cocoa being the highest.