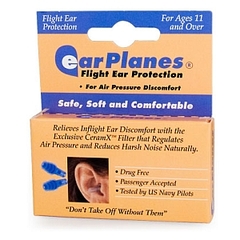 EarPlanes consist of two elements: a hypoallergenic silicone ear plug and a ceramic pressure regulator. The silicone earplug has four circumferential rings which provide an airtight seal between the product and ear canal. The ceramic element is a controlled porosity filter, one end of which is exposed to the external cabin pressure, with the opposite end exposed to the sealed chamber formed when the ear plug is inserted in the ear. Thus, as the cabin air pressure changes, a pressure differential is created across the ceramic filter, thereby causing air to flow through the filter. The filter acts as an impedance to the flow of air into and out of the ear canal.
Discomfort is caused by blockage and/or swelling of a passengers Eustachian tube(s). The air pressure changes induced by the aircraft's descent are too rapid for the blocked Eustachian tubes to adjust properly. However, EarPlanes, provide an equal but opposite impedance on the exterior of the middle ear, allowing relief. Discomfort is reduced because the air pressure difference on the exterior and interior of the middle ear is lessened allowing the Eustachian tubes to function more normally.

Before inserting, pinch nose and blow to clear your ears. Use your opposite hand to pull the top of your ear upward. Insert the ribbed end and turn like a cockscrew until snug.
For best results, always insert EarPlanes one hour before landing. Remove after landing and when the cabin door is opened.
Chronic sufferers may also insert EarPlanes just before take off. EarPlanes may be removed when the airplane reaches maximum altitude and reinserted one hour before landing.

If discomfort persists, discontinue use and see your doctor. Use by children must be closely supervised by an adult. Children with ear ailments should not use this product.