Smelly feet are the butt of many jokes. But having smelly feet and footwear is no laughing matter & it's a highly embarrassing condition that can cause the sufferer to feel self-conscious and stressed. 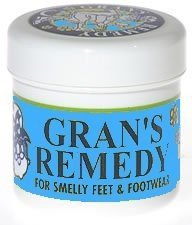 Foot odour control
The main thing that feeds foot odour is sweat. With more than 250,000 sweat glands each, your feet are one of the parts of the body that perspire most. In one day, each foot can produce more than a pint of sweat! Sweat is basically just salt and water, so it doesn't have a distinctive smell. The smell is actually caused by bacteria on our skin that feed on the sweat, and excrete waste, which has a strong odour.
Sweat, bacteria growth & a bad smell
Wearing the same pair of shoes every day means that sweat builds up inside the shoes. This keeps the shoes moist, contributing to the production of excessive perspiration, bacterial growth and often, an unpleasant smell. If your footwear is left to dry for a few days, the smell usually fades away. But once you put the footwear on again, the warmth returns and so does the bad smell.
Effective treatment for smelly feet
Independent research has shown that Gran's Remedy is 100% effective for actively treating all five of the bacteria and fungi known to cause smelly feet and footwear. Gran's Remedy treats the feet and shoes at the same time.

Sprinkle a spoonful (Spoon included in the pottle) of powder in each shoe daily for seven consecutive days or until the powder is used up. Gran's Remedy leaves your feet, shoes and socks odour-free for up to six months.

Any other footwear that you wear intermittently, such as sports shoes, should be treated each time they are worn untill the powder is used up.

Gran's Remedy is manufactured in New Zealand and exported worldwide to countries such as the Australia; Japan; Korea; UK; USA; and parts of Asia & Europe.
In New Zealand Gran's Remedy Foot Powder has been the market leader in its category for many years.
Using a traditional remedy handed down through the generations, Gran's Remedy today is a leader in the development of Smelly Feet and Footwear products.
From humble beginnings in 1982, when the first batches of Gran’s Remedy were hand made in a sterilized mixer, Gran's has grown to distribute over 1.5 million units of it’s famous Powder variants throughout the world.