For the protection and temporary relief of minor irritation of the skin, mouth, and gums, denture discomfort, and minor oral injuries. 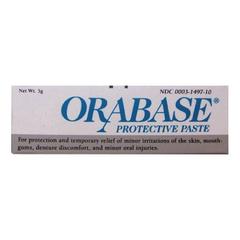 By virtue of its superior adhesive properties ORABASE paste adheres tenaciously and remains in intimate contact with mucous membranes of the mouth and gums, protecting the afflicted area in the mouth against further irritation from chewing, swallowing and other normal mouth activity. It acts like an invisible bandage.

ORABASE Paste adheres to the skin around ileostomies, fistulas and colostomies and used in conjunction with Stomahesive wafers, protects the peristomal skin against excoriation, and allows excoriated skin to heal.

Dab a small amount on affected area as often as needed, particularly after eating. Do Not Rub.

As in all cases of potentially infected areas, a physician or dentist should be consulted prior to using Orabase Paste. A health professional should also be consulted if the irritated area does not heal within seven days.